The Soul After Death 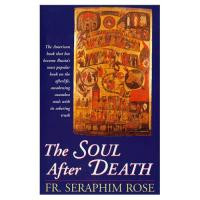 The Soul After Death

What happens to the soul when it leaves the body at death? What is its state from then until the Last Judgement? Do the numerous present-day books on life after death give any real answers to these questions, or are they only hints about a reality which even those who "return from the dead" often misunderstand?

The Soul After Death is a comprehensive presentation of the 2,000-year-old experience of ancient Christianity regarding the existence of the other world, addressing contemporary "after-death" and "out-of-body" experiences, the teachings of traditional Oriental religions and those of more recent occult societies.

The spiritual realm after death defies observation, yet an inherent desire of humanity persists to peer beyond this threshold--a threshold through which we all must pass. Although the mystery of what lies beyond the veil of death is not fully visible to us in this life, nonetheless, writings and teachings of ancient Christianity dating from the first century have proven timeless and straightforward, yielding sound insights into the spiritual world beyond death.

From a foundation based firmly in Orthodox Patristic teachings, Fr. Seraphim Rose offers an interpretation of the meaning of the contemporary experiences which have been publicized by Drs. Kubler-Ross, Moody, Osis and Haraldsson, and other researchers.

Principal teachings of Orthodox Christianity concerning the properties of the soul after death are presented in a clear concise manner, as taught by Church fathers and teachers of the early centuries. The Soul After Death offers an undiluted draught of pristine, mystical Christianity as it has existed since the time of Christ.