Timeline of the Eastern Orthodox Church 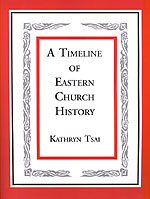 Timeline of the Eastern Orthodox Church

The story of the Eastern Christian Churches in the first millennium is a fascinating and complex tale of political intrigue, cultural transformation, theological disputes and missionary endeavors. The Churches in the East, outside the sphere of influence of the Church of Rome, are often disregarded in many works and classes on church history. This invaluable tool helps to fill in the gap, presenting the fascinating drama of the "other" 90% of Christendom. This story includes the theological disputes in the Eastern Roman Empire that formed the Byzantine and Non-Chalcedonian Churches, to the East Syrian missionary endeavors that established Christianity from the deserts of the Middle East to the Himalayas, and onwards to the shores of the Pacific Ocean.

Be aware that this is a study and reference tool designed to be an accompaniment to a typical narrative text of Church history, and is laid out is a series of parallel time lines of different parts of the world, covering notable political, ecclesiastical, theological and cultural events of the first millennium.