St Gregory Palamas as a Hagiorite 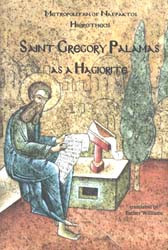 St Gregory Palamas as a Hagiorite

The life and the teaching of St. Gregory Palamas, Archbishop of Thessaloniki, will set out the limits and the great difference which exists between the abstract and impersonal life of Eastern religions and the Orthodox Tradition as well as between Barlaam's scholasticism - moralism and Orthodox spiritual life. And this is important precisely because tendancies which we have already referred to prevail in the West today, such as the impersonal way of life and scholasticism together with moralism, a fact that creates a deep despair and speculation. Moreover the reading of this book will show the particular features of Byzantium, which used to be called Romania (Roman Empire) as it is preserved and kept even in our days on the Holy Mountain. Nowdays many people admire the art which developed in the Byzantium (Roman Empire) but in the final analysis this art was the outcome of a holy life, it was the fruit of a way of life, as we can see in the life and the teaching of St. Gregory Palamas.